My name’s Linnea, I’m living in a small village called Alfta with my partner, Hanna and her son.

Animals have always been a huge part of my life and I was raised around both dogs and cats. The first dogs have already been around here since I was born in the middle of the nineties. Later, around the beginning of the two-thousands, the first dog that I have strong memories of, moved here. And American cocker spaniel by the name “Charmis For The First Time” that we called Tyson. A black and white male with incredible own will and own thoughts. Not long after him, a grown American cocker spaniel female by the name Light Dream’s Special Time “Paris” moved here, that more or less became my first very own dog. She was a very loving and happy dog. Affectionate and always mischievous. Unfortunately, only three years after she moved to us, she passed away because of cancer.

I have previously been a breeder of guinea pigs on quite a large scale and have even competed with the guinea pigs and exhibited. There were four champions, one Swedish winner and a number of goldpet and gold clipped-long hair. During my 5 years with guinea pigs, there were 19 litters.

My first shih tzu is Lola, “Piquants Play Dirty”. She moved here thanks to my friend Jack Stockstill who knew that I would quit breeding guinea pigs and was interested in shih tzus. She arrived at our place in spring 2012, and was my first planned breeding and exhibition bitch.
Unfortunately, sometimes it doesn’t go as planned and we chose not to breed but Lola will always be the heart of the kennel. She nowdays lives with my father in Köping.

When I did choose not to breed, the search for a new exhibition & breeding star started. The search went on a while before we decided to buy “Jomi-Woo’s Miss Maggie May” from Josefine & Johanna Leijon from the north.
We’ve followed Maggie from the time she was born until today. She’s a female that spreads a lot of joy and laughter.
And has a wonderful temperament. We look forward to continuing to rejoice with her and hopefully her offspring. 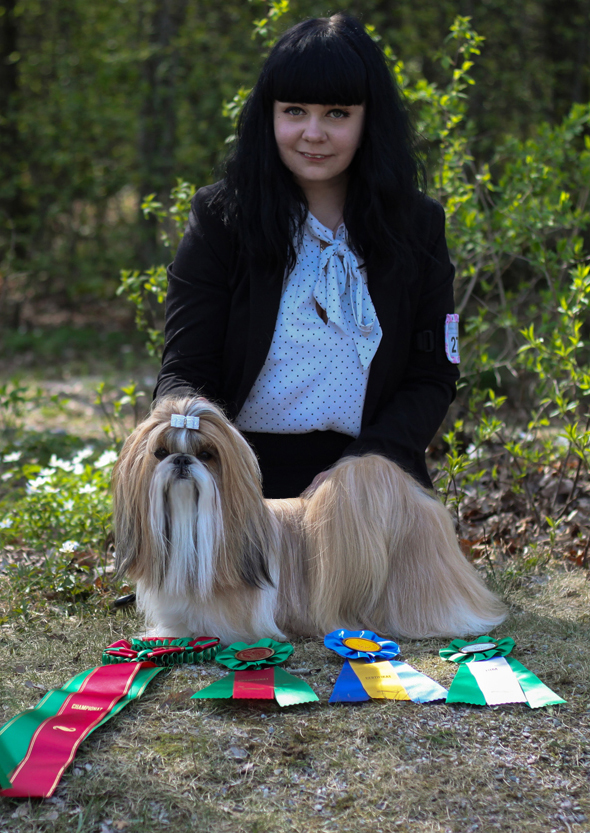